As promised, the gimmicky marketing keywords have been eschewed from the blog title.

A couple of good reads on the “free money” created by low interest rates and impact on real estate pricing. The article theorizes that 27% of the actual 31% increase in real estate prices is caused by the yield curve compression.

A follow up article discussing the potential housing bubble building up. A great graphic on the build up of real estate prices. 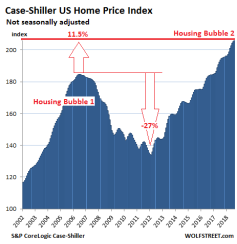 And while on the subject, here’s another gem from Anthony Carfang’s timeline on the 2008 crisis – this piece is a look at how the indices, key stocks impacted and interest rates stood during the turbulent 2008 as compared to now.

During the week, I had an opportunity to interact with several members of a back office operations group for a large bank. The one overarching theme through several questions was the potential loss of jobs due to greater digitization and automation in the financial services space. While the short term impact on the more tactical jobs cannot be denied, we all need to do a better job on education around the job creation opportunities that digitization brings in.

Digitization leads to an enhanced connectivity between actors and ideas creating an unique market place. While digitization does indeed create productivity gains and efficiencies, the biggest benefit is the proliferation of ideas and undiscovered product combinations in this new age market place.

The word connectivity or market place or network is of special significance, because densely connected systems will always lead to greater innovation as compared to one sparsely connected. The enhanced 24 hour mobile connectivity has led to amazing products like online retail, segmented marketing and on-demand cabs, leading to millions of jobs.

Here’s a U-curve on the job groups across the American economy.

And here’s the crit – too often, we come across digital architects and blue sky thinking strategists talking about wide, all encompassing enterprise wide changes in the matter of a few months. While the intent and long term goal makes sense and is undoubtedly the way forward, creating collaboration and non-didactic education forums is equally important to creating an inclusive environment of innovation and change.

Regulatory Platform – It was also a momentous week for my team as our work on a critical regulatory marketing infrastructure went live this week. A product of multiple iterations of inspired thinking and just good old fashioned grind.

Congratulations to this wonderful, talented team!!

While going through news on Amazon’s decision to open big centers in Crystal City and Long Island, I was stuck by an interesting thought. How much has Big Tech contributed to this big divide that America is experiencing in the last decade.  Coincidentally, found an article on very similar lines on WSJ.

And this Big Tech divide is actually a global phenomenon – Christopher Mimms article   about the global backlash to Big Tech in countries like China and India which are increasingly putting their weight behind the Flipkart and Baidu & co. is the new battle.  I found the suggestion of Big Tech as an agent of neocolonialism  intriguing.

For folks following the burgeoning market place of data and technology, a key news piece would the Nielsen and Microsoft tie up coming right on the heels of Microsoft’s tie up with Walmart. Among other analytics, the platform will offer consumer diagnostics and the ability to measure media impact of marketing, branding and sales efforts.

A mentor gave me pause when he asked me to do a detailed causal analysis on the other person’s perspective during a frustrating and long drawn out engagement. It was a fruitful exercise and caused me to –

“We are starting at different points in the transformation journey”

“I don’t yet understand his challenges in the current environment”

View all posts by adighosh99